First published on January 30, 2017 by The Ecologist: http://www.theecologist.org/blogs_and_comments/Blogs/2988588/witness_the_la_gomera_forest_fires.html

Discussions around the effects of climate change tend to focus on the planet’s polar extremes, expanding deserts or low-lying areas. La Gomera – a subtropical forest perched more than a thousand metres above the ocean – is also at risk.

Señor Ángel Fernández is precisely the sort of person you want in charge of a project where failure is not an option. Meticulous, knowledgeable, patient and, above all, determined, this is not a man prone to exaggeration nor one likely to overlook an important detail.

I am sitting with Mr. Fernández in his modern, glass-walled and – mercifully, given the midday heat – air-conditioned office in San Sebastian, the main town on the island of La Gomera, a beautiful, volcanic outpost 18 miles west of Tenerife.  In 2012, the island was hit by a huge fire – ‘El Gran Fuego’ – which devastated around a fifth of Garajonay National Park, a UNESCO World Heritage site and the undisputed jewel in La Gomera’s already sparkling crown.

The forest that defines the park is the best-surviving example of an ancient eco-system that once covered much of Europe and North Africa, but is now found only on the Canaries, the Azores and Madeira. Its trees are central to all life on the island, capturing the daily clouds of the trade winds and transforming them into precious water. It is this process which turns this hot, jagged rock at the edge of the old world into a lush and vibrant paradise.

But, like so many natural wonders, this magical forest is at the mercy of human beings.

Mr. Fernandez – the director of the park and the man charged with overseeing its recovery – explains that in summer of 2012 around 30 relatively small fires were detected and extinguished. Almost all of these, he says, were started by people, and while some were caused by carelessness – a thoughtlessly discarded cigarette or a poorly-controlled camp fire – many were the work of “incendiarios” – arsonists. 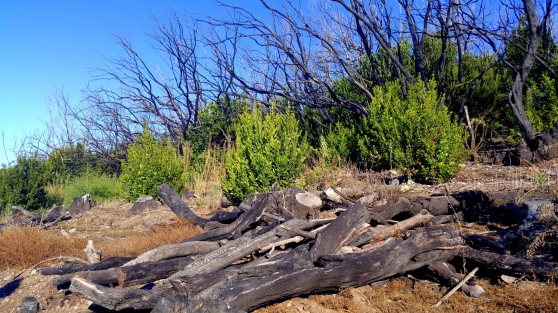 In the case of El Gran Fuego, which started in late summer, Mr Fernández is in no doubt about what happened.

“It was deliberate,” he says gravely, his shoulders dropping just a little.

“The conditions were very dry that year, so when the fire was started it spread extremely quickly and was very difficult to stop.”

“It came in two waves, disappearing for a few days – hiding – before coming back to do more damage. It was not completely extinguished until the rains came in October.”

“But the problem is not just the people starting the fires,” he adds. “You really have to understand what has happened here as part of the global change taking place.”

Discussions around the effects of climate change tend to focus on the planet’s polar extremes, expanding deserts or low-lying areas; but here, a subtropical forest perched more than a thousand metres above the ocean is at risk due to humanity’s impact on the fabric of our world.

“Human activity means that all around the world environments are changing,” Mr Fernández says. “Many countries are experiencing problems with fire as temperatures go up. It is the same for us and we have to find a way to respond.”

Conscious, perhaps, that he is speaking to a citizen of ‘Brexit Britain’, Mr. Fernández points out that the EU has been crucial to the recovery effort so far. In particular, money from the little-known ‘Life+ Programme’ – which distributes billions of Euros to support ‘environment and climate action’ – has helped fund initiatives and experiments in areas such as fire prevention, soil restoration and tree regrowth.

Some of the most effective solutions have been relatively simple, for instance, the creation of ‘barricados’ – a series of dam-like structures, formed of the blackened remains of trees and designed to prevent the fragile soil from being washed off the slopes – and the decision to replace highly-flammable plants with native, slow-burning alternatives in critical areas.

Other ideas are more high-tech. Mr. Fernández tells me of plans to establish fire-response systems which make use of linked, automated water-cannons. These arrays, he says, will be moved rapidly into areas threatened by future fires and then used to block the path of the flames.

Above all, Mr. Fernández emphasises the complexity of the challenges faced by the people of La Gomera. There is no one-size-fits-all solution.

“You cannot approach this as being a single problem,” he says, leaning forward in his chair. “Instead we see it as lots of connected problems affecting particular areas. We are making good progress and in time the forest will recover, but a range of different actions will be necessary to protect the forest for the future.”

That complexity is made real for me the next day when I meet Ricardo, a park ranger who shows me some of the areas directly affected by the flames. We meet at Laguna Grande, a remarkable clearing high in the forest and the symbolic centre of the island.

“It is actually like a miracle that this is still here,” Ricardo tells me, smiling.

When the fire was at its most destructive, huge walls of flame raged all around this area. In some instances the inferno was so intense that when it reached a barrier – a wider section of road, for instance, or a sudden rocky ridge – it simply leapt into the sky (“like a nuclear bomb”) and then swept forward to consume a new patch of pristine, priceless forest.

Yet amidst the destruction, the Laguna itself remained untouched, as though the heart of La Gomera had been somehow protected.

Many other areas were not so lucky. Over the next few hours we visit a number of sites where the impact of the fire is visible at first-hand.

The first stop is down a tree-lined path that drops from the roadside into the forest.

“This part here is a sort of sanctuary, but just a little further… , ” Ricardo says, leaving the sentence hanging in the still, early-morning air as we walk on.

Minutes later it’s like we’ve stumbled into another world. All around us the remains of thirty-foot heather trees stand, blackened and broken, the charred skeletons frozen in their final, terrifying moments, reaching up to the sky and calling out for help that never came.

“Some of the burned trees had to be cut down but we have learned that it is better for the new plants to leave some standing, especially the heather. Even like this they bring water to the soil and allow new life.”

Other areas reveal similar themes but with different details. Echoing Mr Fernandez, Ricardo believes a range of approaches is necessary to treat the diverse problems that scatter the park.

“In some places the trees are re-growing on their own and, in time, the forest will be fine. In others we have planted a lot of trees to help nature recover a little faster.”

A little later, and just a few miles down the road, we are walking through another of the fire-damaged sites when a familiar looking shrub catches my eye. It is a variety of gorse native to the Canary Islands which, according to Ricardo, is both a blessing and curse.

“It helps to repair the soil by providing nitrogen,” he tells me. “In some areas we have to let it grow because without it other plants will not be able to survive, but it is also dangerous. It burns very quickly and we are always worried about another fire.”

“We have to be careful to get it right.”

He pauses for a moment, looking out over valley below.

Then, with the same blend of confidence and determination that I saw twenty-four hours earlier, he adds: “Some areas will take many years to recover but it will be ok. We will keep working.”

“The forest belongs to everyone and we must protect it for the future.”

With thanks to the Turismo La Gomera for their assistance arranging my visit.